Four men in a car

Let's consider four men who travel to work in their own cars every day. When the price of petrol goes up, each one complains about the cost of the daily commute. Then there are new tires, services, fatigue and all the other hidden costs of driving.

One day they are talking in the company dining area during lunch. Each one is complaining about the long haul to work and back plus the exorbitant cost of motoring these days. It doesn't take long for them to realize they have been working together all this time, and they didn't know that they all live around the same area. The light bulb goes on immediately. If they travel together in one car, each taking turns on a weekly basis to provide a vehicle, they get a number of long term benefits. Firstly the cost of travelling is immediately quartered for each driver. Secondly, each one only tackles the stresses of driving once a week – the other three weeks he can sit back and relax. Wear and tear is less because each vehicle is travelling the same distance every day but it does so only every fourth week. And the only thing they need to make this happen is the one commodity that was going to waste anyway: the empty passenger seats.

Imagine if you will, one of your production machines idling along at a low capacity. Doesn't common sense tell you that as long as the machine is idle, the fixed costs are eating into your bank account? So you would want to put that production machine to the best use possible. You want to keep it busy so it can earn its keep. Anything less would be a waste of the company's hard-earned income.

And such waste is unacceptable.

Your servers are being wasted

Your servers are just like the cars and the machines. They all have to do a set amount of work every day. And yet each one is letting a vital commodity go to waste: the capacity of the hardware it runs on to do more work. Today, servers are miserably underutilized. And it takes an enormous amount of power to keep them going in this limited state. Think about the cost of keeping the server running even when it is doing very little. What about the power supplies that are being constantly charged in case there is a power failure and the computer needs to be shut down gracefully to avoid losing data. And all those air conditioners gobbling up power in an effort to keep the servers cooled. And all the other costs to keep the entire system running.

What a waste. And what a whopping electricity bill at the end of the month. 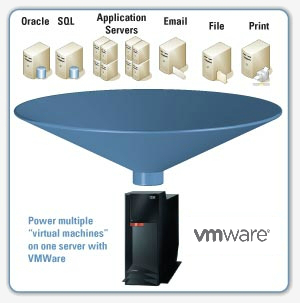 One day back in the late '90s, a company called VMWare realized that this problem was easily solved. What if you could run several servers on one piece of hardware? Who says that each server system has to have its own physical computer? That's like saying each driver must have his own car to get to work! So they created a piece of software that PRETENDED to be the hardware that the server system was running on. Each server system THINKS it is running on a separate piece of hardware when in fact it is running on the same physical machine. And they called this "Virtualization".

Today, Virtualization is a big word in the industry and VMWare is the leading evangelist of the benefits. As the cost of electricity goes up and new sources of energy have yet to be fully exploited, companies are under more pressure than ever to cut back where they can. VMWare spotted a huge opportunity to do so by making sure that a company's hardware is used to its full capacity. Goodbye, high electricity bills. Hello, lower operating costs.

More than that, you'll find your investment in server hardware will flatten as your existing hardware takes the place of new equipment. No more unnecessary hardware purchases.

DracoTec is your VMWare provider

We want your business to be a great success. In our business that means making sure your computer systems are speeding you up, not slowing you down. So how could we ignore the incredible cost-cutting benefits of using VMWare? We couldn’t. And neither will you when you find out what a great benefit this product can be to your business.

VMWare also produces a suite of software products to help you consolidate your servers into a highly available system that can be deployed in any way you choose. When your system goes down, imagine being able to switch to a backup site without your users ever noticing. It’s this kind of powerful control that has propelled VMWare into the lead of the virtualization industry.

We'll assist you to determine the best configuration for your system. And we'll do the complete installation for you so you can spend your time marvelling at the lower electricity and hardware costs. Then we'll provide all the support you need to keep your system maintained at all times.